Home / Who We Are / Leadership / Doyle Beneby 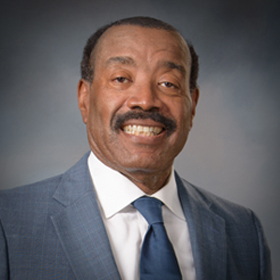 Doyle Beneby serves as Chief Executive Officer of Midland Cogeneration Venture since November 2018. Prior to that, he had been self-employed as a professional director since May 2016. He was formerly the CEO of New Generation Power International, an international independent renewable energy company, from October 2015 to May 2016. Prior to joining New Generation Power International, he was the President and CEO of CPS Energy, the largest municipally-owned gas and electric utility in the US, a position he held since August 2010. Doyle has over 30 years’ experience in various aspects of the electrical power industry.

Doyle holds a Master of Business Administration from the University of Miami, and a Bachelor of Science from Montana Technical College. In 2021, Doyle was recognized as one of the Most Influential Black Corporate Directors by Savoy Magazine.